Been a while.  But, since current events are hitting close to home, I feel the rare urge to chime-in again...

First a reminder: At the upper levels, the real power players, whether they wear the masks of Democrats, Republicans, Socialists, Conservatives, Liberals, or whatever, are all actually Fascists.  They are in politics to maintain the flow of power and wealth to GovCo.  All the rest is just gaming the people into playing-along with them. 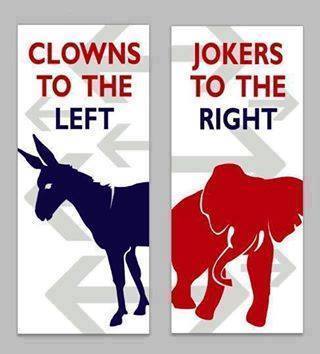 That said, the people at the lower levels are often True Believers...  Or Useful Idiots to the Fascists above.  And, since they seem to be 'winning' at the moment, I'm going to focus on the Left side of the coin, and their favorite rhetorical fallacy tactic as it is applied to issues of the day.

The Moonbats often style themselves as Progressives.  Wanting to Move Forward.  They seem to believe that, to facilitate Progress, they need to tear-down the past and the present, exhibiting rabid animosity for almost all things traditional or even established norms.

Here they encounter a problem;  Traditional things became established as the norm because they worked well for a long time.  They tend to be popular, and perceived as positive and beneficial.  Thus they are hard to effectively attack.

So, rather than admit their disdain for a popular and rationally solid concept, the Moonbats attempt to redefine the terms and symbols related to that concept so that they represent something that can be more effectively attacked.  A form of the old Straw Man tactic.


Growing up in the Old South, the Confederate Flag (or, to be technically specific, the second Confederate Navy Jack) was a common sight.  Flying, hanging as a flag.  As a jacket or hat patch patch.  Incorporated into the design of clothes, horse tack, spare tire covers, truck window shade screens, etc.

But it was hardly ever called the "Confederate Flag"...  It was the "Rebel Flag".  And it represented the spirit of resistance to arbitrary authority.  A concept closely associated with American Patriotism in general, as it was basically what our nation was founded upon!

This was widely understood back in the day.  When the Rebel Flag was emblazoned upon the roof of Bo & Luke's '69 Charger (named after Confederate General Lee, no-less), everyone knew it represented them "fightin' the system like two modern-day Robin Hoods", and there was hardly a complaint about it. 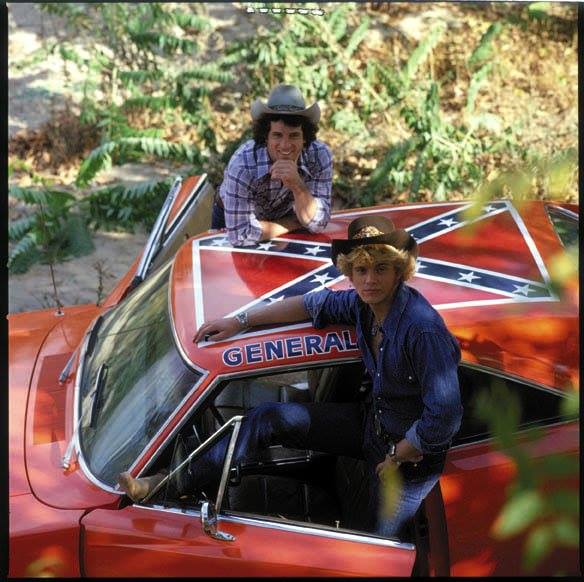 Complaint: The doors aren't supposed to open!
Even earlier in the 1970s, in the overtly multicultural "Kid Power" Saturday morning cartoon, not only did a black child routinely wear Confederate garb, but had a dog named General Lee.  Nobody freaked-out over it. 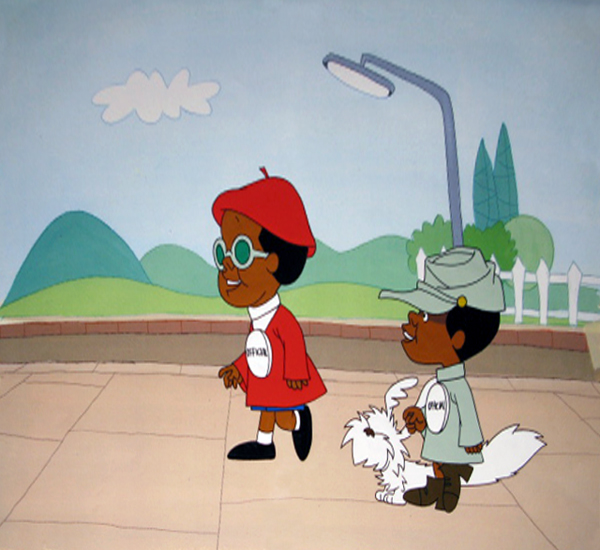 But the traditional American spirit of resistance to arbitrary authority is repugnant to the Left, especially when their team is in the position of authority!  So, to tear down a great symbol of such resistance, they redefine it as a symbol of racism and hatred.

(Yes. It's true that racists have flown the Confederate Flag.  They've also used the Stars & Stripes, Christian Cross, and various other symbols.  That doesn't give those asshats ownership of them!)

The Moonbats call it the "Flag of Slavery" to try and get rid of it...  But they really hate it because it's the Rebel Flag, and they can't stand the spirit of resistance that it actually represents.

So, apparently the black-robed Supremacists have declared that Gay Marriage is now legal throughout the US.  Half the Internet has exploded into a rainbow cybergasm of some sort, while the other half is bemoaning the final demise of America into a cesspool of sin and perversion...

My response to this Monumental , Dramatic Event?

I do recognize that all things traditionally American, or even normal, are under aggressive attack from the so-called Progressives.  "Christmas vacation" becomes "Winter break"...  Expecting English to be spoken is now 'racist'...  Can't fly Old Glory on May 5th...  Can't fly the Rebel Flag anytime...

But the whole "Sanctity of Marriage" ship sailed long ago... Hit the iceberg, and sank to the briny depths with STRAIGHT people at the helm. 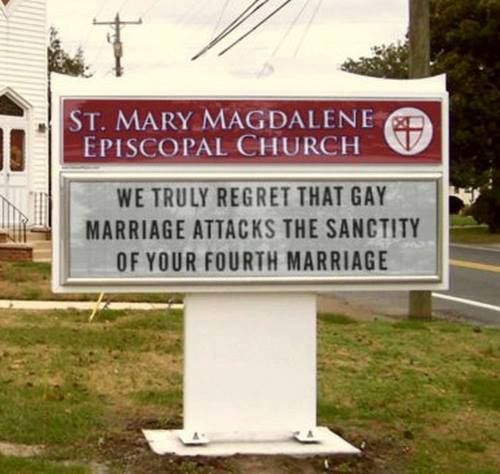 So I'm not going to get all bent out of shape over this particular attack on Traditional America.

But I do have to wonder just what Monumental Victory the gay folks really think they've won...

So now you can get a Marriage License in all 50 States.  Big deal!  A license is Government permission to do things that would otherwise be illegal.  What, exactly, can married people do today that unmarried couples get arrested for?

Used to be that cohabitation of unmarried couples (known as 'Living In Sin' back in the day) was a huge social taboo and actually illegal in some jurisdictions.  But the practice has become commonplace in recent decades, and widely accepted in modern society. (For good or bad.)

With all the cohabitation, divorce, and such, the expectation that a child would live with both biological parents has vanished, and with it the notion of needing marriage to legitimize children.

With the disintegration of the traditional family, avenues for naming whomever one chooses as guardian, significant other, life partner, or whatever for purposes of medical care, custody, insurance, inheritance, etc. have become commonplace.

So, from a legal standpoint, the Big Gay Victory means almost nothing.  Gay or straight, you could live together, have sex, pool your finances, raise children, etc. without a marriage license years ago.

Maybe you were counting on this ruling a major having major impact on the culture?  Sorry, reality doesn't work that way.

While some religious players have embraced Gay Marriage (I suppose they need the business, with fewer straights getting hitched!), the SCOTUS ruling doesn't change the various holy scriptures, and no  Supreme Being worth His salt is going to let five decrepit politicians in black robes influence His divine position on such matters! 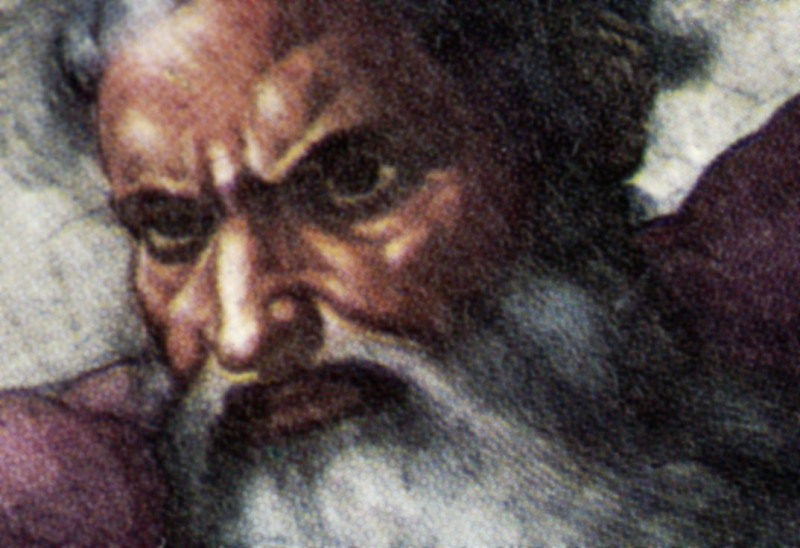 Bite me, Anthony Kennedy!
The geezers who think your gayness is a disgusting abomination aren't going to change their minds because of a court ruling.  The kids who think you are gross will keep right on thinking that.  Omnipotent as statists like to believe the Government is, it still can't alter people's hearts.  This isn't going to change things with the family that disowns you, or even the ones who don't believe your homosexual relationship is a real marriage.

All this ruling is going to do is focus the ire of hard-line social conservatives.  Knowing this, one wonders if the celebration isn't more about 'rubbing it in the face' of sociopolitical opponents than anything else.  Especially in the light of gay folks going out of their way to demand that those who are staunchly opposed to same-gender marriage issue their paperwork, perform their ceremonies, and even bake their wedding cakes!

(Seriously.  There are clerks, pastors, and bakers out there who would be happy to do for you.  Seeking out those who aren't just to mess with them is being a poor winner!)

If you want to really make social headway with gay marriage, you don't need to be beating everyone over the head with rainbow activism.  You need to be proving that you're the real deal by doing marriage as well or better than the average straights.  Stay together for decades.  Raise successful kids.  That'll do more for the cause than circus freak demonstrations and parades ever will. 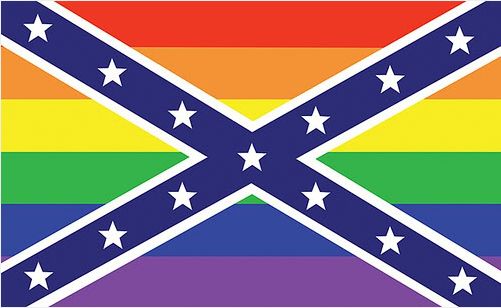 Can't we all just get along?!

Earlier today I posted about the Moonbat tendency to use strawman attacks.  While composing this post, I searched for a pro "Traditional Marriage" meme, and got page after page of sarcastic memes equating Traditional Marriage with 'selling girls for two goats and a cow' or 'polygamy with child brides' and whatnot.

You all know damned well that, when an American refers to Traditional Marriage, he means marriage the way his parents and grandparents knew it.  Not the customs of Middle Easterners from thousands of years ago.   Shame on ya'! That's no better than Wingnuts claiming that Gay Marriage supporters want men to be able to take little boys because that's the way it was done in ancient Greece.

Also, some, including myself, may question whether the Supremacists have grossly overstepped their lawful authority in this matter.  In my case at least, this doesn't mean I have a problem with same gender marriage.