Of course, you don't want to keep the livestock in the barn all (or even most) of the time.  So you're going to need fences.

Most farm animals are capable of jumping, crashing down, climbing over, burrowing under, or crawling through any fence that would be economically feasible to wrap-around a large area.  So fences actually work by creating a kind of psychological boundary.   Some combination of visual and tactile aspects has to convince the critter that it's not worth it to get to the other side of the barrier.

I'm going to skip right over board, split rail, vinyl, and other expensive / cosmetically appealing fences for our purposes.  Kinda' defeats the purpose of a doomstead to have it look like a well-off show farm worth looting!

Barbed wire is a relatively cheap, old school, and effective means to contain stock.  It is physically fairly strong, and has sharp projections every few inches that will stab or cut anything that comes into contact with it.  This usually discourages beasts from pushing into or leaning across it.  It tends to be long lasting and requires little maintenance.

Fence tensioning tool.
Barbed wire needs to be stretched quite tight with a tensioning tool, so reinforced corner posts are required, and sometimes pull-to braced posts if there is a long distance between corners, or non-straight fence line.  The rest of the posts can be lighter, since they serve mostly to counter sagging and maintain spacing between the strands.   Usually four to six strands of barbed wire is used.  With tougher-skinned animals, posts have to be placed closer together keep the critters from spreading the strands apart to crawl through.

Strands of barbed wire are often used to augment other fence that might otherwise be pushed-down or crawled-under.

Barbed wire should not be used for horses.  They are too thin-skinned, and prone to get panicked and tangled in the stuff, resulting in horrific injury.  Yeah, I know that (Insert Name Here) used barbed wire horse fences for years and nothing bad happened.  People get away with foolishness all the time... Until they don't. 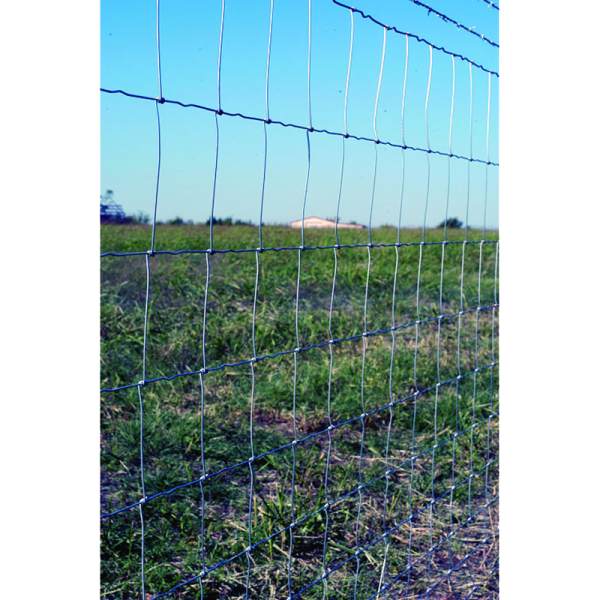 Field fencing, aka hog wire, is a mesh of steel wires knotted to create a pattern of rectangles.  (There is a similar form using welding rather than knots, which is generally unsuitable for livestock.)  It must be stretched tight between reinforced corner and brace posts, and held upright by lighter posts, much like barbed wire.

Field fencing wire is probably the physically strongest practical material for livestock enclosure, especially in terms of being able to withstand a straight-on collision with a large animal.  But is not painful to touch or lean-across.  So it can be crushed down, or rooted up, trod upon, and thus rendered ineffective.  Supplemental barbed and/or hot wire is often used to prevent this. 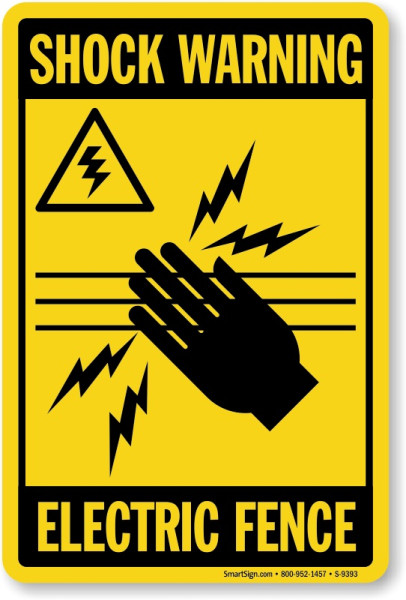 Hot wire is usually relatively lightweight, smooth wire (although barbed wire is sometimes used) attached to the fence posts with plastic insulators.  A fence charger sends a very high voltage, low amperage pulse of electricity out through the fence about once per second.  The return path for the current is through the earth to the charger's grounding rod(s), so anyone completing the circuit by touching the fence and ground (even if indirectly) when the pulse goes through will get an unpleasant, but harmless shock.  Solar powered charges are available for your off-grid needs.

The light weight and tension needed for hot wire makes it easy to install and mend, allows greater distance between posts, and does not require braced corner posts.

When in good repair, under most conditions, hot wire is quite effective.  But it is higher maintenance than barbed and field fencing wires, because green, wet foliage or a single downed strand will short-out the fence and greatly reduce shocking power.  Drought conditions can reduce the topsoil conductivity, also weakening the zap.  Fortunately, once they've learned not to touch the hot fences, most animals won't challenge it during transient current failures.  But they will figure it out after a while, so keep it checked and maintained!  (Most chargers have some sort of gauge that will alert you to ground-outs.)
Lightning can travel through electric fences and damage your charger.  Simple lightning arresters are available and can be installed on the fences to prevent this. 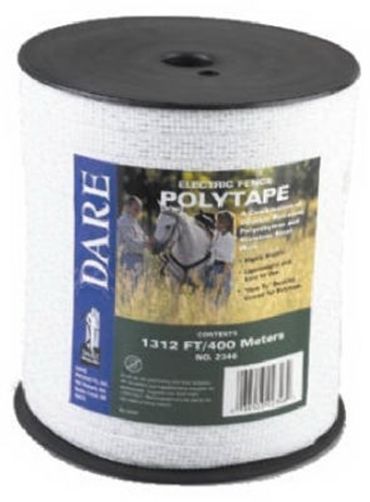 The biggest drawbacks to hot wire are that it tends to by physically fragile and nearly invisible, so animals often crash right through it.  This is why it was often used in conjunction with tougher and/or more visible fences like board, split rail, and field fencing.  But the development of electrified poly tape and rope has solved these drawbacks.

Multiple conductive wire threads are woven into a polymer web tape or cord, which is then installed much the same way as hot wire.  The polymer portion adds thickness, bright color, and physical resiliency that wire alone lacks.  It is nearly as easy to put up and repair.  UV-resistant tape with stainless threads has proven to have a respectable service life. 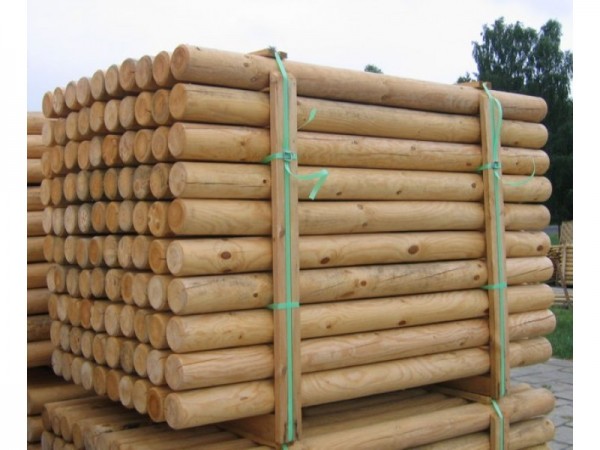 Wood fence posts, soaked black with creosote, were the go-to back home in the Lowcountry.  I think those are considered too toxic for use anymore, but wood posts treated other ways are still commonly used.

I understand that driving wood posts into the ground is a common practice in some places.  We always dug post holes and set/packed them in.  I imagine attempting to drive a wooden post into the ground up here in the hills would reduce the thing to splinters.

Wood posts have the advantages of accepting nails and staples for fence attachment and being relatively safe for livestock.  On the down side, they are subject to rot and breakage. 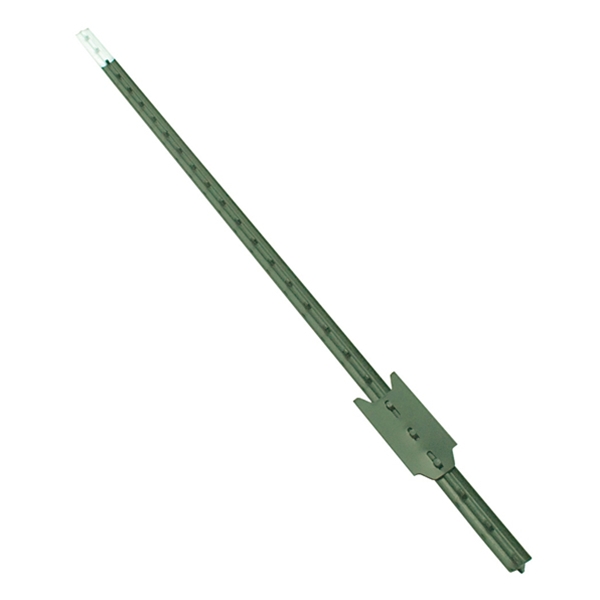 T-posts are made of steel to be driven into even very hard ground with a purpose-specific form of hammer.  (A heavy steel tube, closed and weighted at one end, with handles welded onto the sides.  This is slipped over the top of the post and repeatedly slammed-down.)

T-posts are generally much faster and easier to put-up.  Unless you're dealing with a salt water environment, they'll long outlast wood posts.  Even when hit with a truck, they will usually just bend over rather than break.  (They can be unbent.)  Barbed and field wire are attached with simple wire clips.  Various types of snap-on hot fence insulators for t-posts are widely available.

Because of their somewhat jagged, absolutely unforgiving tops, t-posts do pose a hazard to animals who might try to jump or climb over them.  Horses are particularly prone to severe cuts and even lethal impalement due to their thin hides, height, and inclination to jump obstacles.  T-post caps should always be used in horse fences.  Post-top insulators do double-duty, making the posts safer and providing an attachment point of hot fencing. 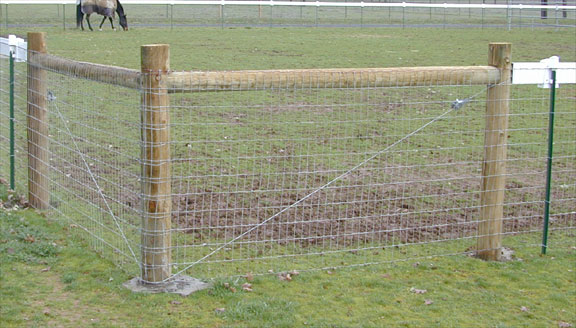 Brace posts are used where great strength and rigidity are required.  The corners of high-tension wire fences.  At gates.  At intervals or at bends in long stretched of wire fences.  An extremely strong post, like a utility pole, railroad tie, large bore steel pipe, or reinforced concrete culvert can simple be sunk deep and set in concrete to do the job.  A more traditional approach is to sink strong, wood posts about 8' apart, with another post placed horizontally between them near the top, and a diagonal cable twist-tightened to lock them together.

Where heavy wooden posts are employed, the tops can be cut off at a shallow angle and/or coated with tar, paint, aluminum flashing to reduce water soaking into the end grain of the wood and speeding rot.

Before building our doomstead, we had the opportunity to try electrified poly tape fencing (a new product at the time) on the old farm, and decided it was the fastest and most economical approach for our needs here.

We selected half-inch, white tape with stainless threads.  Half inch is wide enough for good visibility, but narrow enough to fit through insulators designed for wire.  The ones designed specifically for tape had proven too flimsy.  The narrow tape is also less subject to fluttering in the wind.  We make splices with aluminum wire wrapped and pliers-crushed flat to try and contact all the metal threads in the tape.  Aluminum is easier to work with, and doesn't rust-burn the tape like steel wire eventually does.

The light weight of the tape allowed us to set t-posts at 20' intervals.  Domed insulator caps on the top of each, with a regular insulator snapped-on about a foot above the ground.  Since the tape needs only hand-pulled tension, no brace posts were required.  Four strands of tape were run.  One at the top, one at the bottom, and two diagonally, forming an X between each pair of posts.  This arrangement allowed four strands to be run with only two insulators per post, and the crossing created more intersections of tape, helping to keep the voltage distributed to all strands.

Because the thin, stainless threads seemed to be poor long-distance conductors, we added an aluminum carrier wire along with the bottom strand.  Every 100' - 150', we added a vertical 'jump wire' which connects the carrier wire to all tape strands.

Spring-loaded, insulated handles make it possible to open gates on live, hot fences without getting shocked.  It's best to install the gates so that the juice comes in from the wire loop the gate handle hooks into, so the gate goes dead the moment it's opened.  That way you don't have to worry about getting accidentally zapped, and you can toss the handle down onto the ground without shorting-out the fence.

Folding the end of the gate tape and splicing it back to itself creates a loop that can slipped onto to an insulator (not otherwise attached to the hot fence) for an easily removable gate, handy for allowing animals to move freely between paddocks.

To keep voltage going across the gate opening regardless of whether the gate is closed (which may be necessary to keep sections of the fence alive), an underground connector cable can be buried.  This needs to be very high voltage insulated wire, not household extension cord wire, which is only insulated against a couple hundred volts.  Fortunately, the proper stuff is fairly cheap and available from livestock product suppliers.   Be sure to bury it deep, as livestock going through the gate will wear a path.

When we started this doomstead, we had only mature, sane horses who had already become accustomed to hot fences.  So the four-strand X pattern was sufficient.  Foals and calves are more likely to try to slip through the spaces between the strands, so we later reinforced with additional horizontal strands.

Adapting for an ornery bull was not quite so easy.  We pulled the tape fence down from one paddock, then added new t-posts between the existing ones, giving us 10' spacing.  Since this was only a one acre enclosure, with relatively short corner-to-corner runs, we made brace posts by driving extra t-posts in a few feet down the line from the corner posts, then bending the new posts to be affixed to the corner post as diagonal supports.  (We did this with lots of heavy wire.  But it turns out that there are couplers made for exactly this sort of thing.) 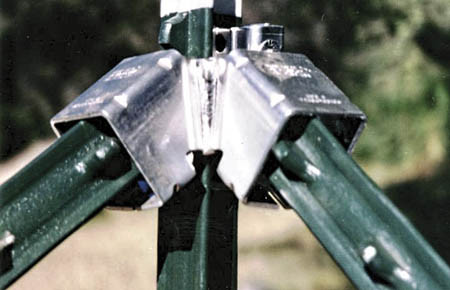 We pulled heavy gauge field fencing to replace the tape, kept the insulator caps and ran an electric wire to discourage reaching over the fence.  Extended insulators a foot or so above ground level are used to suspend electrified barbed wire several inches inside the fence line to keep the bull from rooting under the field wire.

Bulls are more trouble than they're worth, but that's a story for another chapter!
Back to Low-Nonsense Doomsteading Index.