Essential to the safe use of firearms is knowing exactly what you're doing when it comes to what ammo goes into which guns.  With about a zillion different cartridges out there, it is very possible to chamber and touch-off a round that was not designed to be fired in that particular weapon.  Depending on the combination, the result could be anywhere from poor performance to a zero-delay hand grenade.

You'd think it'd be simple.  Make sure the head stamp on your ammo matches the markings on your gun and you're good, right?  But no.  Due to the long and complex development history of firearms, it's kind of a mess.

Even the term "caliber" is a bit murky.  It usually means diameter in inch measurement with implied decimal, as in "forty caliber" meaning ".40 inch".  Sometimes it means a specific cartridge.  For an assortment of reasons, it is almost always used nominally when referencing loaded ammunition.  Most .45 cartridges use slightly larger than .45" diameter bullets, while most .44 cartridges actually use bullets just under .43", and .38 cartridges use bullets less than .36".

Sometimes an extended caliber is a way to distinguish a cartridge, like the .307 Winchester, which uses a .308" bullet like most other nominal .30 caliber rifles.

A "grain" is tiny unit of weight (1/7000 pound) traditionally used to measure both gunpowder and bullets.  It does not refer to a particle of powder.

One common way to identify cartridges in the 19th Century was by nominal caliber and powder charge in grains.  The 44-40 was a .44 bullet loaded over forty grains of gunpowder.

This naming convention worked well when cartridges were loaded with black powder.  But the rise of smokeless propellants at the end of the century meant that there would be far too great a difference between the various powder choices to give a simple load weight.  Only a few of the very earliest smokeless cartridges (like the 30-40 and 30-30) used this style of designation.

When it became clear that powder charge wouldn't work for smokeless cartridge designation in the early 20th Century, the number after the hyphen was switched to the last two digits of the introduction year.  This convention didn't last long, but did yield the still-popular 30-06 cartridge.  (Thirty caliber of 1906.)

Since firearms are marketed internationally, metric designations, given in millimeters, are common.  Sometimes just the diameter, but more specifically diameter and case length, as in 9 x 19mm.


Diameter, then Words and/or Initials.

There are lots of cartridges with the same diameter bullets, and more than a few with the same length case as well.  So a straightforward way to identify them is with a name based on the company that developed the round, some practical description of the ammo, or the nation of origin.  Occasionally, a wholly contrived name will be applied.  These descriptors are often abbreviated, since there's just so much room on a head stamp.

As if things weren't already confusing enough, some cartridges, especially those based developed from older rounds, mix and match naming conventions.  For instance, the 6.5-06 A-Square is a (nominal) 6.5mm bullet in a necked-down 30-06 case developed by the A-Square company.

Shotguns and the shells they fire are usually designated by gauge, which is determined how many bore-fitting round balls can be made from a pound of pure lead.  The bigger the shotgun, the fewer balls can be made, and the lower the gauge number.

The 12 Gauge is the most popular modern shotgun size.  The smaller 20 Gauge is also fairly common for youths, ladies, and anyone else who might be recoil-sensitive.   10, 16, and 28 Gauge shotguns are still around, but no longer common.  Most shotgun shells are nominally 2 3/4" in length.  Many guns are chambered to accept 3", and some newer models will take 3 1/2".  Shorter shells, including 2 1/2" and 1 3/4" mini-shells can safely be fired from the longer chambers, but may not cycle reliably in pumps or auto-loaders.

Of course, somebody had to go and muddy-up the world of shotguns with the .410, which is not technically a gauge, but an inch caliber.  I guess "68 Gauge" just didn't sound right.  This is the smallest shotgun commonly available, and has often been a beginner's gun for children.  Standard .410 shells are 2 1/2" long, but 3" shells have recently been introduced for revolver use, of all things. 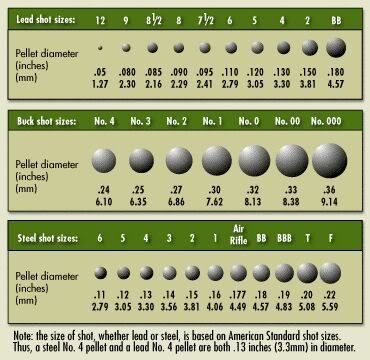 The pellets used in shotgun shells are identified by two number scales, buckshot and birdshot, both of which are counter-intuitively numbered highest for smallest.  Buckshot shells are usually marked with the number of pellets, while birdshot shells are marked with the total weight of shot.   The smallest shot (#10 - #12 on the birdshot scale) is called ratshot, suitable for close-range use on small pests, like rodents and snakes.

Companies like to put their names on cartridges, like the .30 Winchester Center Fire. Other companies don't like stamping their rival's name on ammo or rifles, so they label it something like 30-30.  Eventually it becomes known as 30-30 Win.

Other companies were also reluctant to stamp their rival's name on the .380 Automatic Colt Pistol cartridge, preferring to call it .380 Auto. But that was just the start, since it was also known by it's metric designation as 9x17mm...  Having less case length than most of the other 9mm cartridges rising at the time, it was also called the 9mm Short...  And, being used around the world, that became 9mm Kurz/Corto/Court...

Which is all the more confusing since, in America, we usually think "9mm" means the 9x19mm.  Which itself is also known as the 9mm Parabellum/NATO/Luger.  You might reasonably expect this round to also be known as the "9mm Long/Largo".  But that designation was used by the Browning 9x20mm Long... And the 9x23mm Largo/Bergmann–Bayard/Bayard Long...  Which must never be confused with the 9x23mm Winchester...

Exceptions to the Rule.

Despite the dumbfounding confusion of cartridge designations, you must never, EVER use a cartridge for which your gun isn't specifically chambered...  Except that sometimes it's perfectly okay to do so.

This is frequently the case with revolvers chambered for straight-walled, rimmed, lengthened versions of earlier cartridges.  A .357 Magnum can fire .38 Special ammo.  .44 Special works in a .44 Magnum.  .45 Colt works in a .454 Casull.  .22 Short works in a .22 Long Rifle revolver...  But, just to mess with us, .22LR shouldn't be fired from a .22 Magnum cylinder, since the latter cartridge is derived not from the .22 Short/Long/Long Rifle, but the nearly forgotten, larger case diameter, .22 Winchester Rim Fire.


Coping With The Madness.

The saving grace in this swirling jumble of nomenclature is that you only have to know the details for the guns you shoot.  Can you fire a .357 SIG in a .357 Magnum handgun?  It doesn't really matter if you own only a .45 ACP!

Though it might be wise to learn a bit about the more common cartridges, even if they aren't used by any of the weapons in currently in your collection.  You never know what you might come-across in the future, when you might not have access to the Internet for technical data.

Possible Appendices...
Overview of Common Cartridges.
Don't Try This At Home:  Firing the wrong cartridge. What happens?
Back to Low-Nonsense Doomsteading Index.