And now we break for just a wee bit o' nonsense... 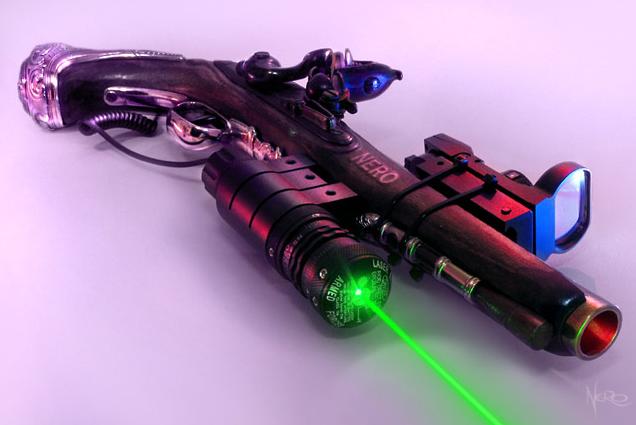 There are very real reasons for a doomsteader to own guns, and a number of firearms that are of practical utility.

There are also a lot of guns on the market which are essentially range toys and conversation pieces.  And that's okay!  Nothing wrong with buying a gun just because it's awesome looking and fun to shoot.  'MERICA!

But many of preppers confuse the playthings with essential tools, which can be a problem if the latter are neglected in favor of the former.

Keep in-mind that "impractical" is not the same thing as "useless".  You can certainly shoot game or a bad guy with a novelty gun.  But there are better, usually cheaper weapons that put you at less of a handicap. 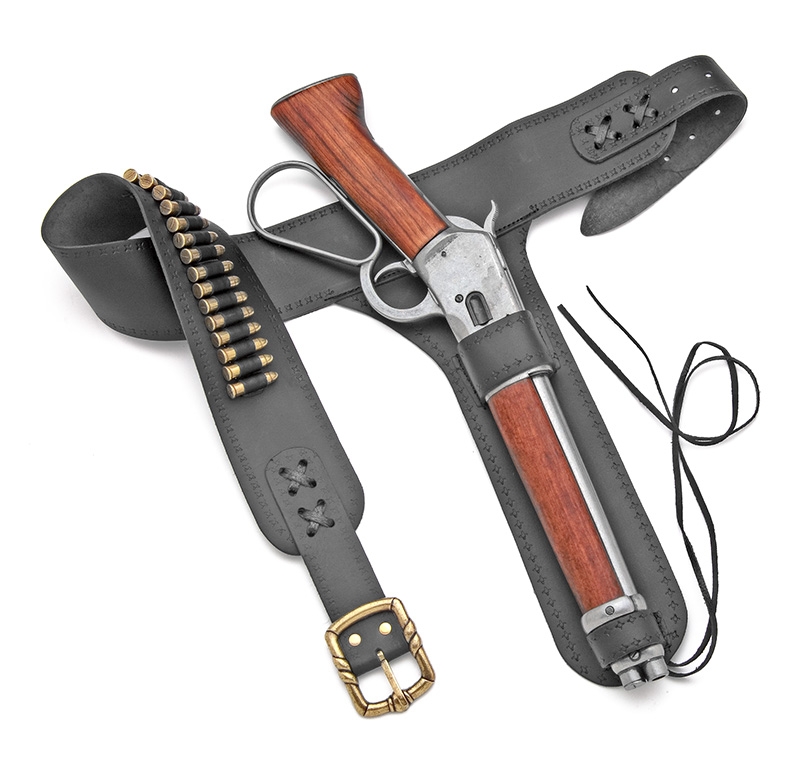 The poster child for Hollywood contrived guns, from the heyday of TV westerns, when producers made their protagonists stand-out by giving them distinctive weapons.  Bounty hunter Josh Randall of Wanted Dead or Alive carried a big-loop Winchester lever-action rifle that had been cut down at both the barrel and stock so that it could be used as a sidearm.

In reality, this is a pointless gun.  The handgun-level 44-40 Winchester cartridge, fired out of shortened barrel, would have been slightly inferior to the typical .45 Colt revolver in power, and no better in accuracy.  The Winchester uses a tubular magazine, which gets cut down along with the barrel.  This leaves the Mare's Laig with the same capacity as a six-shooter.  All in an excessively heavy gun with an obnoxious overall length that takes two hands to use, with a higher probability of malfunction and slower rate of fire than what all the other horse-opera guys were shooting!

To be fair, Wanted Dead or Alive didn't even try to pretend this was a particularly good weapon.  In the first episode, Josh Randall found himself at a noticeable disadvantage trying to work the lever from a prone position, then managed to hit a physically unimposing adversary (none other than the future Little Joe!) with a round that didn't take him off his horse or prevent his escape.

Yet, due to it's badass appearance and association with Steve McQueen, who played Josh, and whose picture was in 1960s and 70s dictionaries next to the word "cool", people still love the Mare's Laig.

Getting one used to be a problem, since cutting down a rifle makes it subject to registration and taxation under the federal National Firearms Act, which most people don't want to mess with.  But it finally occurred to someone that a Mare's Laig manufactured as such from the start (rather than being modified from a rifle) would technically be just a handgun, not restricted by the NFA.   New manufacture Mare's Laig (Ranch Hand, Mare's Leg) pistols are widely available at this writing. 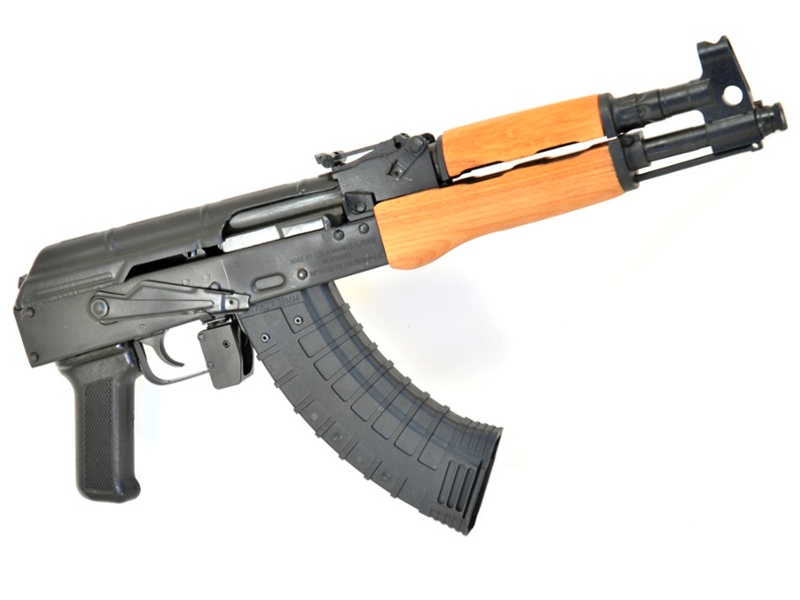 So, if we can get away with selling a cut-down 19th Century lever-action rifle as a handgun, why not do the same with modern, semi-auto rifles?

Building the AR-15 and AK-47 with short barrels and no shoulder stocks has become a popular way to get around the NFA.  Of course, you loose considerable of power and accuracy with the short barrel.  These weapons are bulky and poorly balanced if you actually try to shoot them like pistols, and awkward to hold and sight rifle-style without a stock.  A more conventional pistol in 9mm +P with a 33 round extended magazine would be handier, and would have the advantage of being a normal, holster-friendly sidearm when you switch back to a 17 round mag.

Now there are new, adjustable 'wrist braces' (wink-wink) on the market that make these AK/AR shorties a little more shootable.  But, if you need something that fires rifle rounds, a 16" barrel is already pretty handy.  Seems like the main purpose of these guns is to say "up yours" to the bATFe...

Which is pretty good justification, come to think of it.

Shotguns had stocks long before 1934, when the Feds started regulating this sort of thing.  And for good reasons...  The stock helps you manage recoil, acts as a spacer to put your eyes in alignment with the sights, and gives you a more stable hold on the gun for accurate shooting.

Replacing the stock with a pistol grip throws all that away in exchange for making the shotgun compact enough for... What?  Hiding under your coat on the way to a mob hit?

"A great truck gun!" I've heard some say about stockless shotguns (as well as Mare's Laigs and AK/AR pistols).  But what does that mean?  If it's a gun you carry in your truck, why would it need to be truncated?  Trucks have lots of room, and don't get tired from carrying a full-weight shotgun.  If it means you're gonna shoot it from inside the truck, an awkward, two-hand weapon is a poor choice indeed.

"Home defense!" Really?  Shotguns are indeed the obvious go-to for home defense, but how does lack of a stock help you there?

There's this notion that shotguns produce a wall of devastation, so you don't really need to aim them.  But shot patterns are actually pretty small at defensive range, even with a short barrel.  It is quite possible to miss, especially when you are just pointing, rather than properly aiming.

Mossberg has figured out how to exploit loopholes in the law in order to produce a 14" barrel shotgun (er- "firearm") with a pistol grip that avoids NFA regulation.  I'm half-tempted to get one myself, just because it looks badass and I like the rule-bending aspect.  But, if there's real shotgun work to be done, I'd leave the novelty gun alone and grab my full stock 12 gauge! 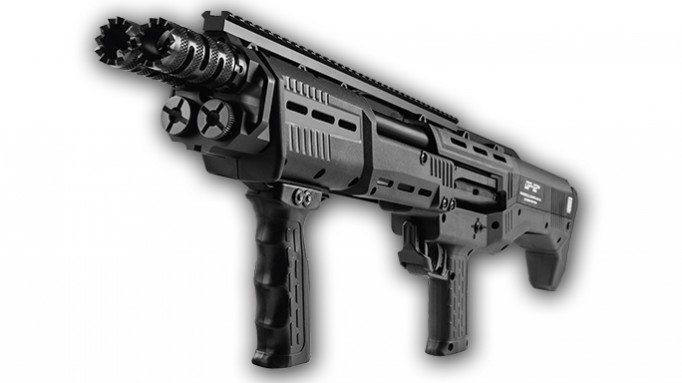 I remember watching the old Looney Tunes and thinking that Elmer Fudd had a heck of a shotgun, as it appeared to be a double-barreled, pump-action, semiautomatic, with a huge magazine capacity!

Well, modern manufacturers aren't content to leave Elmer's gun in the realm of cartoons.  They're selling dual-tube magazine shotguns for umpteen round capacity, pump-action double barrels (rack once, shoot twice), Assault Rifle derived semiautomatics that can be fed from a big drum with dozens of rounds, and more.

Tacti-cool as these scatterguns are, they are complex in design and function, which reduces reliability.  And they are expensive.  As in, you could buy multiple Mossberg 500 or Remington 870 tried-and-true shotguns for what one of these things costs, and have change enough left over for a steamer trunk of shells.

A long sequence of blasting away nonstop with a shotgun is a 'Going Out In A Blaze Of Glory' climax scene in a zombie apocalypse movie.  The half dozen rounds in a conventional shotgun is probably sufficient to convince more realistic threats to find an easier target, at the very least. 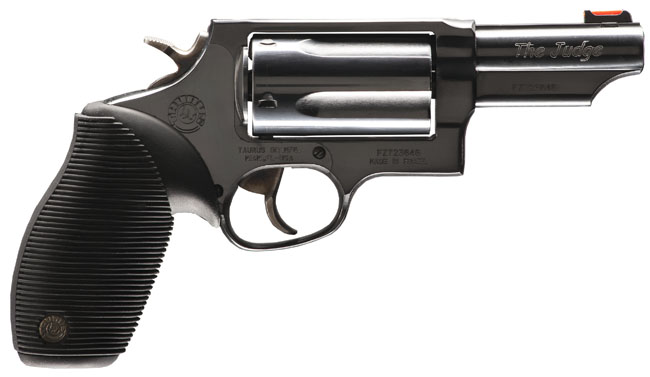 These are on the bubble of practicality.  The Taurus Judge was initially promoted as an automobile defense gun.  And the concept has some merit.  A load of birdshot to the face would no-doubt be substantially more effective against a carjacker, over-the-line 'protester', or road-raging nut than pepper spray.  All with substantially less risk of serious collateral damage than flinging bullets around.  Plus, the Judge (and the S&W Governor it inspired) can have the first chamber(s) loaded with .410 shotshells, and the remainder loaded with .45 Colt or .45 ACP, just in case the threat at hand is a psycho, crackhead, or Moro Tribesman who won't back-off after being hit with pellets.

What keeps these revolvers from qualifying as practical is the fact that you can get revolvers to do essentially the same thing at half the weight and price.  Shotshells can be purchased (or hand-loaded) for revolvers in several popular calibers.  These rounds may not have the payload of .410 shells, but we're not shooting quail at 30 yards with them.  At the short ranges at which you'd use a birdshot revolver, the snake-shot should be an effective deterrent against ordinary thugs.

Pulling .410 Revolvers even deeper into the novelty category are the many .410 gimmick shotshells that have been introduced for them.  Slug and buck, disks and BBs, etc.  Kind of misses the original point.  If you're going to fire projectiles more substantial than birdshot, why not just use good old BULLETS?

In the 1971 film Dirty Harry, Clint Eastwood pointed a .44 Magnum revolver at Albert Popwell and told him that it was the most powerful handgun in the world, and capable of blowing his head clean off.  While not entirely correct, this moment of Hollywood badassery started an unending quest among gun nuts to own the most wrist-breakingly, eardrum-burstingly overpowered gun they could get their hands on.

The .44 Magnum is on the uppermost tier of powerful practical sidearm cartridges.  Much more, and you'll need a revolver so large and heavy to make full use of it that you'd may as well carry a long gun.  Even .44 Magnum class cartridges are mostly wasted on muzzle flash in popular compact revolvers, and provide only a modest firepower advantage over sub-magnum rounds like the .44 Special.

Still, practicality doesn't figure into this sort of thing.  So we've got a whole slew of cartridges that make the .44 Magnum look like a mouse-gun.  But they're far better suited to something like an updated Winchester 1886 rifle than any handgun. 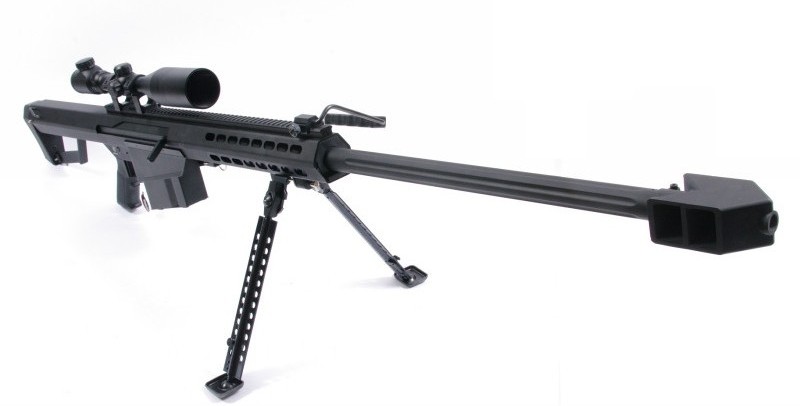 In the wake of World War I, John Moses Browning decided to radically scale-up the standard US infantry rifle cartridge for use in his new heavy machine gun, creating the .50 Browning Machine Gun round.  It wasn't long before someone realized lighter rifles could be built around this powerhouse cartridge.  These have gained considerable popularity since the 1980s.

A .50 BMG is the most powerful rifle you can legally own without registering it under the NFA as a "destructive device".  It has an effective range of well over a mile, and can punch through medium armor and considerable hard cover.

In skilled hands, an 'ordinary' bolt-action with decent glass in common calibers like 30-06 and .308 can reliably take out targets at over a quarter of a mile.  There are few realistic scenarios in doomstead defense that would require more than that from a 'sniper' rifle.
.
Back to LOW-NONSESENSE DOOMSTEADING index.